Movie of the Month: Angels with Dirty Faces 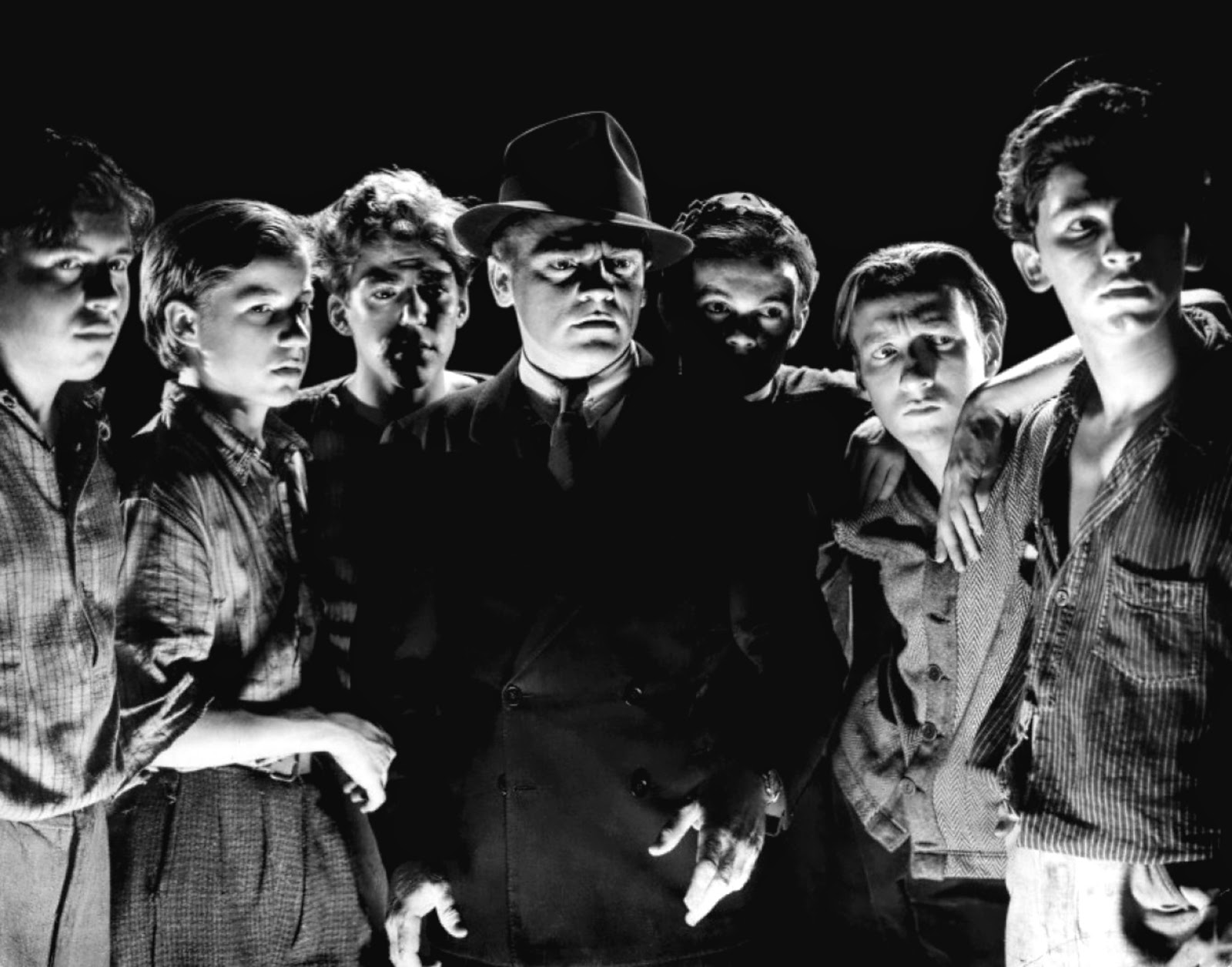 Our March movie of the month is Angels with Dirty Faces (1938) directed by Michael Curtiz and starring James Cagney. Here is Cagney with The Dead Ends Kids. They are, from left to right: Bernard Punsly; Bobby Jordan; Billy Halop; Leo Gorcey;  Huntz Hall and Gabriel Dell.

Angels with Dirty Faces is the quintessential Warner Brothers gangster film, brilliantly directed by Michael Curtiz and featuring one of James Cagney's greatest performances. The film remains relevant more than 70 years after it was made with the famous electric chair sequence standing as  one of the most famous moments in American cinema.

Angels with Dirty Faces tells the story of two boyhood pals who follow very different paths in life thanks to a cruel twist of fate.  Rocky Sullivan (Cagney) becomes a big-time gangster, running the corrupt officials at city hall with the help of a crooked lawyer (Humphrey Bogart). Jerry Connolly (Pat O'Brien) follows a very different path. He becomes a parish priest in the Lower East Side neighborhood where he and Rocky grew up, tirelessly working to better the lives of a gang of unruly teenagers (the Dead End Kids). The two men renew their friendship after Rocky gets out of prison, but soon he and Jerry are at odds over his alliance with a shady contractor (George Bancroft).
Angels with Dirty Faces is a key film in the late thirties revival of the gangster genre. Warner's made its name, and made Cagney a huge star, with a string of highly successful gangster films in the early thirties. The gangster films were also highly controversial with the guardians of public morality, who regularly took to the pulpit to decry all the bootlegging, killing and various other assorted sinning that was being foisted on the impressionable minds of American youth. Father Daniel A. Lord, a leading advocate for movie censorship, decried the lax morals of the sound era by declaring, "silent smut has been bad. Vocal smut calls to the censors for vengeance."

The rise of the production code and the Catholic Legion of Decency forced Warner's to alter their tried-and-true gangland formula. They still made gangster pictures, but they had to inject a moral lesson into the films, and the script for Angels with Dirty Faces was the perfect way to show some good old-fashioned sinning while wrapping it up with a bright religious bow. Cagney was a bootlegger, a gangster and a thief, but his best friend was Pat O'Brien, an actor who made a career out of playing incorruptible priests whose unwavering moral backbone won the approval of even the most pious members of the Legion of Decency. O'Brien's saintly demeanor and pious bromides allowed Cagney to be Cagney with the full approval of the censors.

Angels with Dirty Faces was Cagney's return to gangster films (he walked out on Warner Brothers in 1936 over a contract dispute) and the studio wanted to make sure it was a huge success. Not only did they cast Cagney's old pal, O'Brien, but they loaded the other parts with well-known Warner's players like Ann Sheridan, Bogart and Bancroft. The Dead End Kids, who were coming off two hit films, were cast as added box-office insurance. Cagney was never one to brag about his accomplishments, but he remembered the role of Rocky Sullivan with fondness in his autobiography. Cagney based Rocky on a colorful character that Cagney encountered while growing up on the Lower East Side. Cagney used to walk past a Hungarian rathskeller that was the hangout for  a small-time hood who stood on the street corner hitching up his pants, twitching his neck and uttering Rocky's famous catchphrase, "Whaddya hear? Whaddya say?"

Angels with Dirty Faces was a box-office bonanza for Warner's, and it was also a huge critical success. The film earned three Oscar nominations, including Cagney's first best actor nomination (he lost to Spencer Tracy who played the incorruptible Father Flanagan in Boy's Town). Cagney was honored with a New York Film Critics Circle Award for Best Actor.

We'll have a lot more about Angels with Dirty Faces throughout March. We'll feature the careers of the Dead End Kids, the partnership between O'Brien and Cagney and the history of the old Hollywood gangster film.