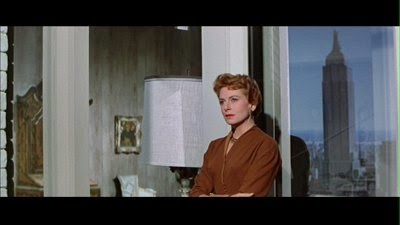 The Empire State Building is instantly recognizable to moviegoers around the globe as a New York City landmark and the location for many old Hollywood films. Here, Deborah Kerr contemplates the renowned skyscraper in a beautiful scene from An Affair to Remember (1957).

The Empire State Building is a key plot point in our movie of the month, An Affair to Remember, but the New York landmark was always a favorite location for Hollywood filmmakers.

The Empire State Building attracted Hollywood almost as soon as the skyscraper on the corner of Fifth Avenue and West 34th Street in midtown Manhattan opened on May 1, 1931. The distinctive Art Deco design of the Empire State Building's facade made it instantly recognizable. Many old Hollywood directors used establishing shots of the Empire State Building to let audiences know that the film was taking place in New York. The Empire State building was often used as a frequent tourist spot in movies, like the sailors on leave in On the Town (1949).  In the clip below, Frank Sinatra and Betty Garrett share a little romance on the observation deck while singing You're Awful. At least they're having a better time than poor Jules Munshin, who dangles off the side of the skyscraper at one point.


The film that implanted the Empire State Building in the public's consciousness was of course, King Kong (1933), which was released only two years after the tower opened. Kong was a groundbreaking special effects film with the great ape's ascent up the Empire State Building as the film's piece de resistance. Animator Willis O'Brien used a scale model of the skyscraper and he built an 18-inch model of Kong (the great beast is supposed to be 40 feet tall) out of wire mesh, rubber, foam and rabbit fur that created a surprisingly lifelike monster (quite frankly O'Brien's work is still superior to all of the remakes). Kong was an unforgettable experience for many moviegoers and it provided the building's owners with some much needed publicity (the skyscraper was nicknamed "the empty state building" at the time because of its lack of tenants).

The observation deck on the 102nd floor of the Empire State Building is synonymous with romance largely because of director Leo McCarey. The tower plays a supporting role in his 1939 romantic weepie, Love Affair. French playboy Michel Marnet (Charles Boyer) and American Terry McKay (Irene Dunne) have fallen madly in love on a transatlantic cruise, even though they are both engaged to others. The couple agree to separate for six months to test their love; at the end of that time period they will meet atop New York's most famous building. "It's the nearest thing to Heaven we have in New York" Terry tells Michel.

McCarey remade Love Affair in 1957 as An Affair to Remember starring Cary Grant and Deborah Kerr. The film is basically a shot-by-shot remake of Love Affair, although the Empire State Building looks beautiful in the lush technicolor photography. Grant's lonely sojourn atop the observation deck was shot in a studio, but it is a lovely sequence nonetheless, as the lights of the city twinkle behind the increasingly forlorn Grant.

An Affair to Remember Empire State Building King Kong Love Affair Movie of the month. movieofthemonth On the Town