The Isotta-Fraschini in Sunset Boulevard 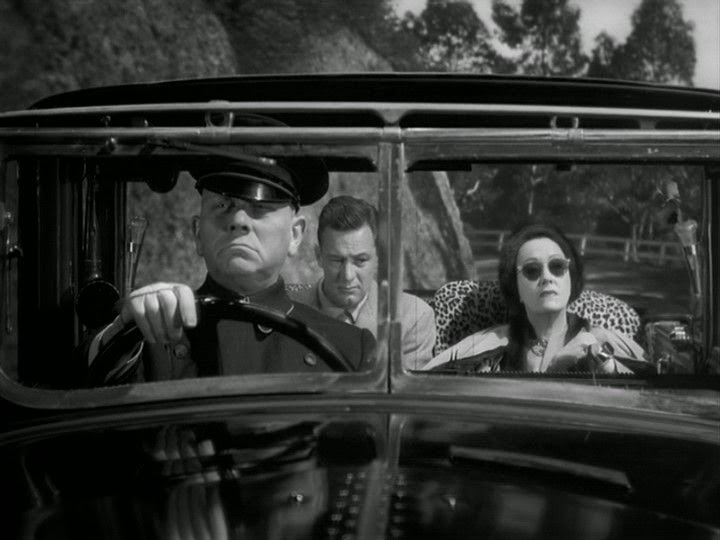 Cars are more than just transportation in Billy Wilder's film: They are important status symbols that drive the plot of this dark Hollywood satire. Hapless screenwriter Joe Gillis (William Holden) becomes entangled with the delusional Norma Desmond (Gloria Swanson) while hiding from debt collectors who are trying to repossess his car. After Gillis moves in with Norma, they ride in Norma's magnificent Italian luxury car, a 1929 Isotta-Fraschini 8A. The car was specially detailed for the movie queen--Norma brags to Gillis that "It cost me $28,000"-- with leopard-skin upholstery, Norma's initials engraved on the door and a gold-plated car phone. The short clip below explains the car's history.

The Isotta-Fraschini becomes a crucial turning point in the film when the delusional Norma mistakes a call from the studio to use her car for a film as an invitation to make her comeback movie with director Cecil B. DeMille. Norma shows up at the studio, only to be treated as an object of curiosity and ridicule (clip below). Fun fact: Erich von Stroheim, who plays Norma's faithful butler Max von Mayerling, couldn't drive so the car scenes had to be filmed with the Isotta-Fraschini being towed or by using process shots. I've always thought that Holden's acute embarrassment in those scenes was more than just acting--imagine being towed up and down Sunset Boulevard in that car with Swanson and von Stroheim in costume.

Wilder's use of the Isotta-Fraschini was part of his painstaking efforts to recreate the world of silent film stars. Although the film takes place in 1950, Norma is still living as if it's 1929 where she is "the greatest star of them all" and her Isotta Fraschini is the last word in luxury and elegance. The car used in Sunset Boulevard is now displayed in Museo Nazionale dell'Automobile in Turin.

Isotta-Fraschini was founded in 1900 by Cesare Isotta and brothers Vincenzo, Oreste and Antonio Fraschini. The Milanese company made its name by making race cars, but they discovered the American market in the 1920s. Isotta Fraschini began turning out fabulously detailed luxury vehicles for the nouveau-riche Hollywood stars who spared no expense in their lavish tastes. It girl Clara Bow and Norma Desmond's old friend and tango partner Rudolph Valentino owned Isotta-Fraschinis. The car was also used in several films, including Death Takes a Holiday (1934) starring Fredric March, Without Reservations (1946) starring John Wayne and Claudette Colbert and Farewell, My Lovely (1945) starring Dick Powell.

Isotta-Fraschini's fortunes declined after The Great Depression and World War II rocked Europe and the United States. The company eventually merged with an engine manufacturing firm, but Isotta-Fraschini went bankrupt in 1999. A new firm was established in 2000 with hopes of reviving the company.

What's next: A look at the career of Hedda Hopper who has a cameo role in Sunset Boulevard.