The Essential Films of 1939: Midnight 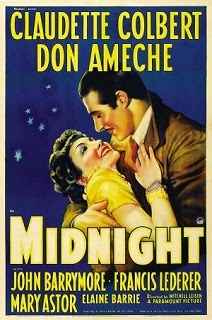 The Plot: Penniless showgirl Eve Peabody (Claudette Colbert) pretends to be Hungarian royalty so she can crash a high-society party in Paris. There she meets millionaire Georges Flammarion (John Barrymore) who hires her to lure a playboy (Francis Lederer) away from his wife (Mary Astor).

Backstory: Throughout the 1930s, Paramount was known for its string of sophisticated high-society comedies that had European settings. The cycle began in the early 1930s with the Maurice Chevalier-Jeanette MacDonald films directed by Ernst Lubitsch. Midnight was one of the last examples of this genre with a sparkling script by Charles Brackett and Billy Wilder and clever direction from Leisen.


Best Performance: John Barrymore as Georges Flammarion. Barrymore was in poor health when he made Midnight (more on that below), but the great actor still turns in a wonderful performance as the cranky millionaire. Barrymore was most celebrated as a dramatic actor, but he had a real gift for comedy. He effortlessly steals every scene he's in, giving hilarious line-readings of Brackett and Wilder's sparkling dialogue, despite the fact that he was reading from cue cards.


Best scene: There are many wonderful set-pieces in Midnight, but my personal favorite is the opening scene where Eve wanders through the rain-soaked streets of Paris in a beautiful gown. The cinematography and art direction are simply stunning and Colbert never looked more beautiful (clip below).


Best Line: "Every Cinderella has her midnight," Eve Peabody.

Brackett and Wilder: Midnight was the third of ten films written by legendary screenwriting team Charles Brackett and Billy Wilder (their last film was our movie of the month, Sunset Boulevard). Leisen changed some of Brackett and Wilder's dialogue, which infuriated Wilder so much that he decided to pursue a career as a director so he would have complete control of his scripts.

Barrymore: Barrymore, 57, gives a wonderful performance in Midnight, but he was in a poor state of health because of years of alcoholism. Barrymore could not or would not learn his lines: He read all of his dialogue off of cue cards and claimed to have no knowledge of the film's plot. Despite all of these handicaps, co-star Mary Astor remembered in her autobiography that Barrymore was "able to act rings around anyone else."


Fun Fact: Mary Astor was pregnant during the filming of Midnight, so director Leisen had to hide her condition by placing her behind furniture or having her hold scarves or fans.

Why it's essential: To put it simply, Midnight is a delightful film. It's one of the least remembered of the great screwball comedies and it deserves to be more widely seen.