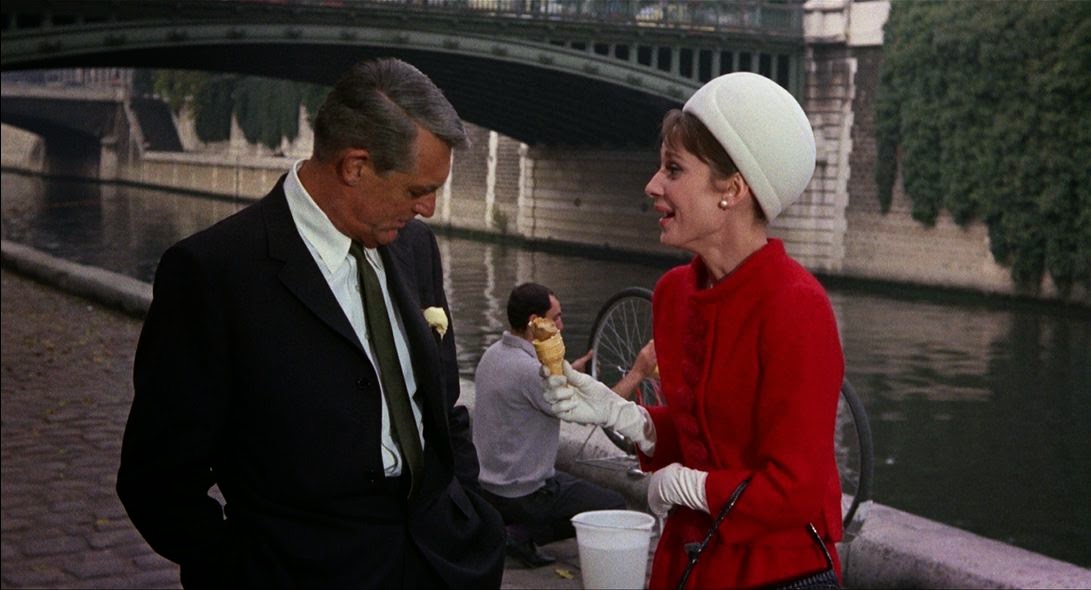 In light of recent events, we're taking a closer look at films at old Hollywood films set in the City of Lights. First up is Charade (1963) starring Cary Grant and Audrey Hepburn.


No old Hollywood film star is more associated with Paris than Audrey Hepburn. She made seven films set in Paris -- actually nine if you count brief episodes in Sabrina (1954) and The Lavender Hill Mob (1951)-- and Hepburn's elegance and sophistication were always a perfect match for the City of Lights. Charade, co-starring Cary Grant and directed by Stanley Donen, is one of Hepburn's best Paris films.

Charade begins with Regina Lampert (Hepburn) mulling over the possibility of divorcing her estranged husband while on a skiing holiday in Switzerland. When she returns to Paris, she finds that her husband has been murdered and that a trio of strange men (James Coburn, George Kennedy and Ned Glass) are pursuing her for a large fortune that her husband supposedly possessed. Regina also reconnects with an attractive older man (Cary Grant) that she met in Switzerland, who may or may not be in league with the conspirators.

Charade seamlessly combines the suspense thriller and romantic comedy genres into one highly entertaining film. Donen made Charade in the style of legendary director and "master of  suspense" Alfred Hitchcock; in fact, Charade has been called the "best Hitchcock film that Hitchcock never made" and it is actually quite similar to Grant's earlier collaborations with Hitchcock, such as North by Northwest (1959)and To Catch a Thief (1955).


Charade began as an original script by Peter Stone and Marc Behm. They offered it to every studio in Hollywood, but no one bought it. Stone shrewdly turned the script into novel. It became a bestseller, even being serialized in the women's magazine, Redbook. Donen quickly snapped up the rights and began finding the perfect cast for the film. (Charade's theme song, composed by Henry Mancini, is featured in the clip below).

Donen always wanted Grant and Hepburn to star in Charade. Hepburn quickly accepted the part: She and Donen were good friends and they had worked together on another Paris film, Funny Face (1957). Grant proved to be a much harder sell. He was pushing 60 and he was afraid that a romance between himself and the 32-year-old Hepburn would make him look like "a dirty old man." It took considerable persuasion from both Donen and Hepburn to get Grant to sign on to the film (Hepburn and Grant's first meeting got off to an awkward start when the nervous Hepburn spilled a glass of wine on Grant's jacket). Grant finally agreed to do the part, but only on the condition that the script would be extensively changed so Hepburn's character would be the one pursuing the relationship.

Charade was one of Hepburn and Grant's biggest box office hits. The film still holds up well today as a fun and frothy thriller with exceptional chemistry between the two leads. The Paris locations are gorgeous and Hepburn, decked out in elegant fashions from Givenchy, never looked more beautiful.

Charade is available on Netflix Instant and DVD.

Join us on Tumblr, where starting Sunday we'll be looking at Charade's Paris locations  and Hepburn's gorgeous wardrobe.

Sources for this article are Audrey Hepburn by Barry Paris and tcm.com.