The Essential Films of 1939: Ninotchka 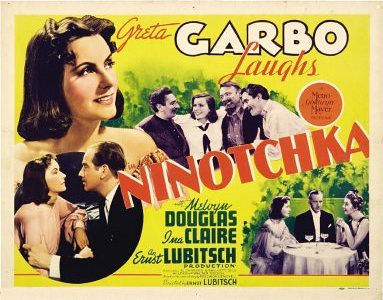 The Film: Garbo laughs in Ninotchka.

Source Material: An original story by Melchior Lengyel with an original screenplay by Billy Wilder, Charles Brackett and Walter Reisch.

The Plot: Stern and rigid Comrade Ninotchka Yakushova (Greta Garbo) is sent to Paris to sort out a mess created by three bumbling appartchiks (Sig Rumann, Felix Bressart and Alexander Granach) who are trying to sell jewelry confiscated from the Grand Duchess Swana (Ina Claire). Ninotchka slowly begins to soften under the spell of the City of Lights and the dashing Count Leon d'Algout (Melvyn Douglas).

Backstory: Garbo was one of the brightest stars in the MGM firmament during most of the 1930s, but by 1939 the public had tired of the prestige dramas she was known for. Studio bosses turned to director Ernst Lubitsch, known for his sophisticated comedies, to lighten up Garbo's image. Lubitsch and the screenwriting team fashioned Ninotchka out of a three-sentence pitch from Hungarian writer Melchior Lengyel: "Russian girl saturated with Bolshevist ideals goes to fearful, Capitalistic, monopolistic Paris. She meets romance and has an uproarious good time. Capitalism not so bad after all"( quote from TCM database).

Best Performance: Garbo responded to the Lubitsch touch with one of the best performances of her career. Her gradual transition from robotic martinet to a tender woman in love is both funny and touching.

Best scene: A tipsy Garbo tries to lead a workers revolution in the ladies washroom of a fancy Parisian restaurant.

Best Line: "Suppress it." Ninotchka to Count d'Algout after he first attempts to flirt with her.

Soviet Satire: Lubitsch and the screenwriters used Ninotchka to poke some fun at the Soviet Union and dictator Joseph Stalin. Ninotchka depicts life in the USSR as bleak, cramped and humorless (clip below). Ninotchka lives in a tiny apartment with three other women and only one bathroom for the whole building (Ninotchka's roomate ruefully remarks of one frequent bathroom user, "you never know if he's going to the washroom or the secret police").

Fun Fact: MGM had a hard time choosing a title for Ninotchka. They went through Give Us This Day, This Time For Keeps and A Kiss From Moscow before settling on the name of the lead character. Studio bosses were worried that the American audience would have trouble with the difficult name, so the MGM publicity department came up with a clever tagline: "Don't pronounce it -- see it!"


Why it's essential: Ninotchka is a landmark in the romantic comedy genre thanks to the witty screenplay, heartfelt performances by Garbo and Douglas and the famous Lubitsch touch. It's still one of the best rom-coms around 75 years after it was made.