The Essential Films of 1939: Each Dawn I Die 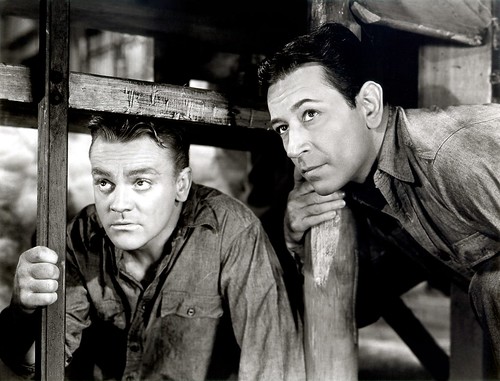 The Film: James Cagney and George Raft do hard time in Each Dawn I Die.

Source Material: The novel, "Each Dawn I Die," By Jerome Odlum.

The Plot: Crusading reporter Frank Ross (James Cagney) is investigating a corrupt district attorney (Thurston Hall). The DA's goons frame Ross for drunken driving and manslaughter. He is sent to the state penitentiary where he meets a notorious gangster, "Hood" Stacey (George Raft), who makes him an offer he can't refuse: If Ross helps Stacey escape, Stacey will track down the real culprits and prove that Ross is innocent.

Best Performance: George Raft as "Hood" Stacey. Raft was a huge star in the 1930s for his portrayals of tough-talking, streetwise gangsters with an eye for the ladies and a weakness for snazzy zoot suits.  "Hood" Stacey is one of Raft's best creations: An insouciant thug who never runs out of one-liners and heads off to serve an 199-year sentence with his fedora tipped to a rakish angle and a pair of expensive cufflinks on his handcuffed wrists. Admittedly, Raft is not as good in the film's dramatic moments (as the film progresses Raft's performance gets weaker while Cagney's gets stronger), but it is a fine performance nonetheless.

Cagney and Raft:  The pair only worked together twice (their other film was Taxi! in 1932), but both men had a deep admiration and respect for each other. They both had tough childhoods in New York City tenements, and they, along with Edward G. Robinson, created the iconic screen gangster in the early 1930s.
Also, according to Cagney's autobiography, Raft saved Cagney's life. Raft grew up around gangsters and he maintained underworld connections for the rest of his life.  In 1942, Cagney was president of the Screen Actors' Guild. He was trying to root out underworld corruption in the guild so the Mafia put out a hit on him, intending to kill him by dropping a heavy light on his head during filming. In a case of life imitating the movies, Raft heard about the planned hit and used his mob connections to call it off.

Best Line: "How tough are ya, Babe?" Stacey to Ross on his first day in the penitentiary.

Why it's essential: Each Dawn I Die has many flaws: The plot is ridiculous and the film is overstuffed with prison cliches that were already hackneyed by 1939. But despite all its faults, Each Dawn I Die is a wonderfully entertaining film that still holds up today. It is a fine example of Warner Brothers realism thanks to the lively performances of Cagney and Raft and the crisp direction of Keighley.